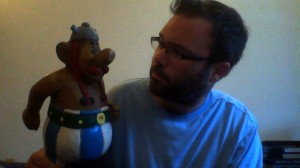 It occurs to me that I should probably explain a little more of what the blog is about, why I’m writing it, and who I’m writing it for.

So, in the “first things second” spirit in which I seem to have approached this blog, here’s the closest I’m likely to come to a mission statement.

First of all, when I say “no recipes”, I’m not denying that recipes can be useful, or that I never refer to them when I cook at home.

There’s a whole category of cooking that depends on weights, measures, precision timing and often dramatic chemical reactions. You’d struggle to make decent soufflés, pastry or bread, particularly the first few times, without the assistance of a recipe. To varying degrees, the same applies to pâtés and terrines, jams and jellies, and all sorts of other foods.

But for the vast majority of the meals I cook, I have neither the need nor the inclination to follow a recipe. If I can do without the kitchen scales, the measuring spoons and the timer on my phone, and instead rely on my senses and imagination, I will. It’s less hassle and much more fun.

Nonetheless, the majority – the huge majority – of food writing is in the form of recipes. I often enjoy reading (as distinct from following) them, and I’m always interested to see a combination of ingredients, or a way of cooking a particular foodstuff, that I’ve never considered before.

But actually following them from start to finish? Not so much.

I don’t think cooking should feel like a chore. But when I cook from recipes, it does. The prospect of noting down the required ingredients, trudging round the shops to buy them, measuring them out meticulously, then following the chef’s instructions to the letter, seems a thoroughly miserable way to spend my time.

And if for some reason I do decide to do all this, and the finished dish turns out to be an unqualified triumph, it still leaves me feeling hollow somehow. Because what have I really achieved, other than demonstrating that (1) somebody I don’t know has devised a nice recipe, and (2) I am capable of following basic instructions? As my eight year old self might have put it: “big wow”.

I seem to be in a minority, though, because as a society we’re consuming more and more food writing, almost all of it in the form of recipes. Sales of recipe books continue to grow; and of course, there’s the small matter of the Internet, through which we can obtain any number of recipes, instantly and for free, for any dish it might occur to us to cook.

That cookbooks continue to sell in their millions in the Internet age is little short of extraordinary, when their reasons for existing have, on the face of it, disappeared. The equivalent recipes, by the same authors and thousands of others, are a Google search away; and the more technical elements – how to fillet a flatfish, say – are demonstrated more clearly and informatively on YouTube than through the static diagrams and photos in a cookbook.

This paradox is explored by Claire Strickett in her brilliant piece, The Tyranny of the Recipe. She argues that “the same kind of behaviour that drives millions to buy gym memberships they’ll barely use drives people to buy cookbooks. The act of purchasing itself feels like a commitment – an achievement, even. Googling a recipe can’t give you that comforting illusion.”

I don’t mean to tell you how to live; but if you have the slightest interest in cooking, and you don’t read Strickett’s article, you’re making a colossal error. It’s the best deconstruction I’ve ever read of the essential pointlessness, and indeed unhelpfulness, of the “recipe first” approach, and of how the ubiquity of the recipe is making us worse, not better, cooks.

Her conclusion is as compelling as it is inescapable, and also does me the helpful service of capturing exactly what this blog is for:

“Freedom from lists and instructions should be the end goal of the home cook – it is more satisfying, much easier, and less time-consuming. A lot more liberating, too. We need to put cooking back in a wider context, not just of other directly food-related issues but questions of economy, health and the environment, for it is always connected to those broader issues, whether we think about it or not.”

Quite so. And in fairness, several of our more celebrated food writers have been trying to do exactly that – in amongst the obligatory recipes, obviously. Hugh Fearnley-Whittingstall merits particular recognition on that front: whether or not you agree with his point of view (and I usually do), you couldn’t accuse him of ignoring the wider context. And more than most, he encourages readers to think, improvise and invent for themselves.

But if he were to leave the recipes out of his weekly Guardian piece, there’d be uproar. Where we see food writing, we’re conditioned to expect recipes. And if we don’t find them, we tend to presume it’s some sort of ultra-highbrow piece, relevant only to the cooking-obsessed few.

Have a search around the web for “no recipe cooking”, or similar, and the Internet cupboard is unusually bare. There are a handful of books available on the subject – Glynn Christian’s How to Cook Without Recipes and Philip Dundas’s Cooking Without Recipes are both worth exploring – and there are a few discussion threads on specialist food websites and forums. But by comparison with the volume of recipes available online, there’s very little to be found.

Most tellingly – and amusingly, to me at least – there’s a very successful (and very good) US website called norecipes.com. Have a look at the homepage, and one thing is likely to strike you before anything else: there are hundreds and hundreds of recipes on there.

To give due credit to site author Marc Matsumoto, he does acknowledge this point in the site FAQs:

“I can see how this might be confusing, but to clear it up, I make almost everything I post without a recipe. I think cooking is most fun and innovative when you just wing it. I do recognize that not everyone is as adventurous as me, so I post the ingredients and method to give you a starting point. It’s my hope that by telling the backstory of a dish and teaching you basic techniques, I’ll arm you with the know-how and give you the inspiration and confidence to come up with your own dishes sans recipe.”

Fair enough, I suppose. And Matsumoto’s recipes are much fuller and more informative than most, offering plenty of contextual information and explanation among the directions.

But something still doesn’t sit quite right with me. Are we so completely inured to working from recipes that even a site called “no recipes” is chock-bloody-full of them?

Perhaps we are. And if so, it’s possible that I’m wasting my time and yours. But I’d like to think there’s a bit of room in this recipe-stuffed world for a different kind of food writing.

I’m talking about words intended to be read at leisure, between meals; not in the kitchen, next to a dangerously hot frying pan, while desperately trying to remember whether you’re supposed to add the mushrooms or the onions first.

I’m talking about ideas and principles that encourage you to approach your cooking in a different, more liberated and creative way; and that, once you’ve read and absorbed them, will leave you feeling a little more confident and capable next time you set foot in the kitchen, and every time after that.

I’m talking about advice that enables you to cook with a degree of flexibility that a recipe never will, so you can adjust your approach to suit your circumstances, and those of your fellow eaters: ingredients, time, equipment, finances, numbers, preferences, allergies and so on.

And I’m talking about writing that will help you to discover, if you haven’t already, that cooking needn’t just be another domestic task, to be fitted around the washing, ironing and hoovering, but a genuine source of pleasure and fulfilment.

Is that too much to ask?