[A little off topic, this one, but on a subject close to my heart. In the unlikely event that you’re missing my food-related warblings, check the last few back issues of The Leither magazine, if you haven’t already.]

A few weeks ago, my favourite band in the world had all their instruments and kit stolen from their tour van after a gig in Lille.

This would be a hefty enough hoof to the knackers of any musician, but that it should happen to the Phantom Band seems particularly harsh (and not just because they’re magnificent, although they are). They’re a six-piece band, and a relatively tech-heavy one at that. Every guitar, amp, keyboard and twiddly bit in that van will have been scrimped and saved for, in part from the meagre income that comes with being a non-stratospheric band in 2015, and in much larger part from the day jobs that allow them to make their music in the first place. This photo they posted on their website shows the final, horrible calculation. 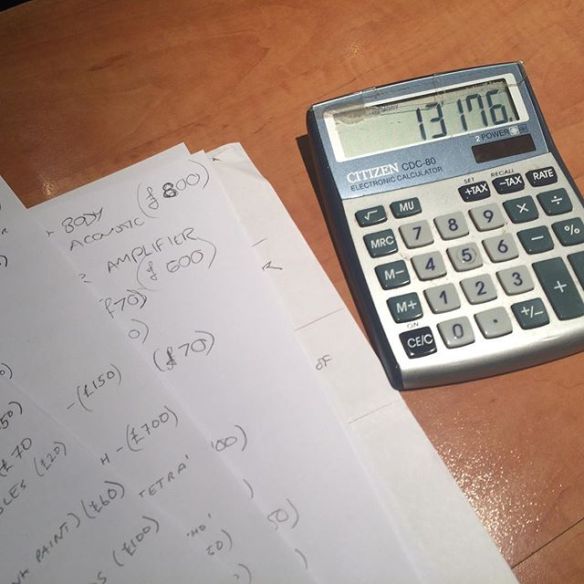 Most cruelly of all, this is the second time in little more than a year that they’ve had all their stuff nicked. The upshot is that they’ve had to pull all their scheduled shows for the rest of this year while they work out what the hell to do next. If they decided to give the whole thing up as a bad job, I’d be gutted, but I’d fully understand it.

If you’re not familiar with the Phantoms, or with the economic realities of making music, none of this may bother you. After all, you might think, if they were really that good, surely they’d be selling enough records to pay for a few new guitars; and if they’re not, then nothing lost. And anyway, what were they thinking, embarking on a tour of Europe without a full time security guard and a comprehensive insurance policy? (If you really want to know the answer to that last question, just ask any skint touring musician – and stand well back.)

And in response to the first point, I’d respectfully suggest that the music business is not, and has never been, a meritocracy. A leg-up from a wealthy record label, influential promoter, prominent critic or X Factor judge will always be thousands of times more effective than years of writing, recording, releasing and touring. As a result, the charts continue to be populated with a largely arbitrary mixture of the good, the average and the irredeemably dreadful; and much of the best music you could ever hear, you probably never will. And unless they’re remarkably resilient, the people who make that brilliant music are only ever a scathing review, sparsely attended gig or cowardly theft away from questioning why they bother.

Yet you’ll never convince me that a band as commercially huge as Radiohead, or as critically worshipped as the Velvet Underground, is anywhere near as good as the Phantoms; because to my ears they’re not, as my iTunes “times played” stats will emphatically testify. And while I’m here, Rozi Plain is better than Kate Bush, Withered Hand is better than Bowie and eagleowl are better than the Beatles. That’s the joy of personal taste: you can disagree with these statements as much as you like, but you can’t disprove them.

When news broke of the Phantoms’ misfortune, the response from their fans was swift and heartfelt: hundreds of messages of support to the band; concerted but fruitless social media appeals to track down the missing equipment; and even talk of a crowdfunding campaign to help replace it. Hopefully the public reaction will have been a source of some solace to them. If nothing else, it might have brought home the point that every time they play, whether that’s to 500 in Glasgow or a few dozen in Weston-super-Mare, there’s someone in the room who truly believes they’re watching the greatest band in the world.

But, gratifying as it may be, knowing you’re loved doesn’t buy you a drum kit. And while the crowdfunding idea has a certain appeal – I’d be more than willing to contribute, given the disproportionate amount of pleasure I’ve had from the 60 quid or so I’ve spent on their albums – I’d imagine the band has mixed feelings about asking loyal fans for what would effectively be a handout.

So as an alternative, here’s a radical idea – a touch retro, I admit, but it might just work. Why not…buy their records? More specifically, why not take away all your Christmas shopping stresses by simply getting everyone Phantom Band records for Christmas?

Buy an LP for your mum, a CD for your big brother, a digital download for your wee cousin who doesn’t really get the concept of a music player that’s larger than the palm of his hand. And when your great auntie Mabel asks why you’ve given her an album of vaguely obscure Scottish indie/folk/electronica/Krautrock, when she’s always been more of a Vera Lynn woman, explain that it’s to broaden her horizons, promote the arts and support a worthy cause (i.e. helping the Phantoms buy a new bass pedal and/or a few well merited pints). If pushed, encourage her to think of it as a musical equivalent of adopting a goat for her through Oxfam.

At worst, you’ll get a few grumbles from confused friends and relatives, and a handful of records gathering dust in a corner before finding their way to a nearby charity shop – which in turn might help some extra folk to discover them. At best, you might just recruit a few new Phantoms fans – and if they could convert a few people, and the people they convert could convert a few more, then the first ever Phantom Band stadium tour might not be too far away. (Well, I can dream, can’t I?)

So head to the Chemikal Underground website or the Phantoms’ online shop, and you can improve the lives of your friends and family, and support a band that more than deserves it, without so much as shifting your arse off the sofa. Or if there are other under-the-radar artists that you’d rather support in the same way, by all means buy everybody their albums instead. Believe me, they’ll appreciate it.

Or, as a cheaper alternative, you could just carry on listening to their music on Spotify instead, secure in the knowledge that if another 10 million people would only do the same thing, they might just about be in a position to buy a couple of new guitars.