Like most people, I get my share of spam email, most of which I ignore. But sometimes, the product on offer is so absurd that it just demands a reply.

This was one of those occasions. 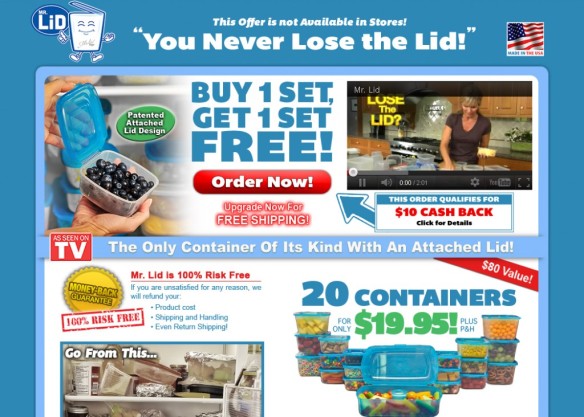 FROM: The No Recipe Man

SUBJECT: RE: Stop losing the lids to your food storage containers

Thank you for your email of 11 November, entitled “Stop losing the lids to your food storage containers”. I apologise for taking so long to reply.

I must admit, I was a little sceptical when I first saw your message. You see, Mr Lid, I’ve been having a spot of trouble with unwanted emails lately, and for a while I was concerned that yours was just another piece of spam – especially when it caused a red warning message to pop up on my browser, and when my initial reply to your address (the one beginning “bounce-66667730”, just for your records) was returned undelivered.

Imagine my surprise and delight, then, when I discovered that nothing could have been further from the truth.

Having done a little research, and eventually found a working email address for you (I hope!), I’ve come to realise that you’re simply an honest tradesman trying to make ends meet, just like the rest of us.

And like anyone else, you don’t have the time to waste reading spam.

But I understand now that you keep your contact details hidden in order to avoid receiving unwelcome messages yourself; and on this, you certainly have my sympathies, particularly with such an instantly memorable name as yours.

In fact, would it be presumptuous of me to suggest that you may have been teased at school about your surname? I’m guessing the other kids used to call you “Dustbin Lid”, or “Inva-lid” – or even “Euc-lid”, in the admittedly unlikely event they were familiar with the work of the Ancient Greek “Father of Geometry”.

If so, I just wanted to let you know you’re not alone. As a child, I suffered from the same issues. I was born and raised as “The No Recipe Man” – that’s the trouble with having hippy parents – and as you can imagine, my classmates used to have great fun taking the mickey out of me. For a while, I tried to reinvent myself as “Tom” – I can’t remember exactly why I chose that, but I suppose it was just the first “normal” name that came to mind. But of course, it made no difference, and “The No Recipe Man” stuck.

Kids can be so cruel, can’t they?

But even as an adult, things got little better. I tried my hand at various jobs – barista, male escort, paleontologist – but continued to find that my name was the butt of near-constant jokes from colleagues, customers and clients alike.

Eventually, I elected to take the same view that you seem to have adopted yourself: “if you can’t beat ’em, join ’em”. I decided to treat my name as a blessing rather than a curse, and began blogging on the subject of no-recipe cooking. Looking back, it seems such an obvious career move that I’m amazed I didn’t think of it before.

And as no-recipe cooking was to me, so (I presume) lids were to you.

And if I may say, what a wise choice you made. Lids play such a vital part in all our lives. Without them, peanut butter would spoil, bins would be infested by rats, and pressure cookers would be next to useless. But such matters worry us not, thanks to that simplest but most beautiful of accessories: the lid.

Moreover, I’m always losing things. Coins, pen tops, children (childminding was another of my short-lived occupations): you name it, I’ll lose it. Admittedly, the lids of storage containers are among the few items I’ve never actually lost, being relatively large and easy to spot; but as your email implies, it can only be a matter of time until I do.

For all that, though, I regret to say I will be unable to take advantage of your generous offer. My finances are somewhat tight at the moment, and I fear the cost of posting 20 lidded plastic boxes from Milwaukee to Scotland would be prohibitive.

With that in mind, might I suggest that you target future emails at people living closer to your HQ, so others do not suffer the same bitter disappointment I have – momentarily glimpsing a solution to all those box-lid woes, only to be thwarted by the grim reality of international shipping rates.

Nonetheless, I would hate to end this correspondence on a negative note. Your passion for lids is powerful and heartfelt: that much is clear from your thoughtful email. And while I must continue to walk in darkness, condemned to struggle on with detachably-crowned kitchenware, it cheers me to know that countless others will reap the many benefits of your imagination, dedication and craft.

That thought will be a source of comfort and strength as I try to come to terms with an inadequately-lidded future.

Lastly, do please give my regards to Mrs Lid. (I trust the two of you remain securely attached.)

Wishing you every success in this and all your future endeavours.

The No Recipe Man